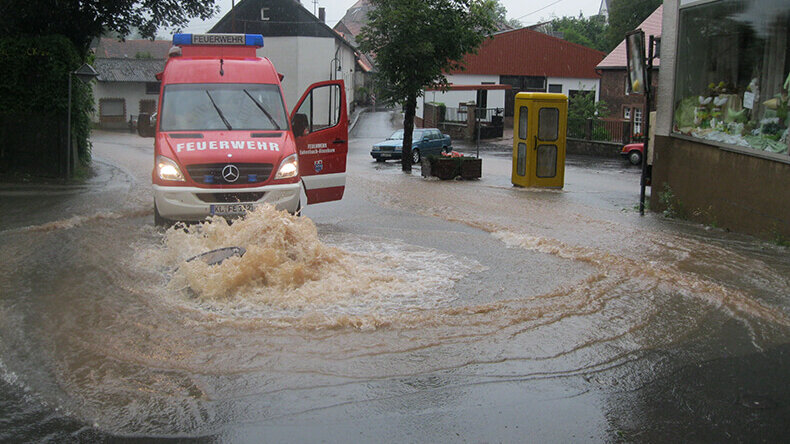 In the joint project "Incentive Systems for Municipal Flood Prevention (AKUT)", researchers from Mainz University of Applied Sciences and Weihenstephan-Triesdorf University of Applied Sciences (HSWT), together with industry and municipal partners, developed an advisory tool that supports municipal employees and specialized planners in preventing flood damage in municipalities. The central approach is to bring all stakeholders together, overcome conflicting goals and collectively generate efficient overall solutions. To achieve this, the method relies on a site-specific optimization and incentive system. Since the tool works with standardized data formats, municipalities can connect it to their existing software solutions.

As a result of climate change, heavy rain incidents like those that occurred this summer are increasing in frequency and intensity. They can generally affect all regions of Germany. Therefore, flood safety is one of the key challenges for urban drainage. In this complex task, various municipal and private stakeholders, such as residents, farmers, local businesses and the forestry sector, must work together in an interdisciplinary manner. To ensure an effective prevention concept, it is necessary to implement measures that serve both the individual and the general public. For example, it is common for flood protection measures to be implemented on properties owned by private individuals or businesses.

A key prerequisite for fruitful cooperation is an understanding of flood prevention as a joint municipal task that can only be mastered together. At present, however, the individual stakeholders lack the willingness to subordinate themselves to an optimized overall solution process. There is often a lack of corresponding incentives.

Getting everyone moving in the same direction with location-specific, optimized strategies

This problem is addressed by the advisory tool AKUT. It supports municipalities in identifying suitable precautionary measures and thus makes it easier for local politicians to decide on the measures to be implemented. AKUT explicitly takes into account the necessary interaction of the various stakeholders along with the corresponding incentives, which are intended to motivate them to implement the steps. After a short training period, the tool can even be used without IT expertise.

First, users draw flood protection measures for retention (such as basins, troughs, plains) or drainage (such as channels, ditches, or embankments) at possible locations on an interactive map. AKUT then uses a mathematical model to determine an optimal selection out of these possible measures. In doing so, it depicts various interrelationships, such as the stakeholder-related risk potential and the expected extent of damage, the effectiveness and feasibility of the precautionary measures, and the necessary individual incentives. In this way, the tool determines an optimal strategy for action, taking into account the site-specific conditions of the municipality and the willingness of the various stakeholders to participate. This includes a combination of structural measures including the associated costs and necessary incentives. Map views before and after optimization illustrate the expected effect on the potential risk.

The project, which was funded by the German Federal Ministry for the Environment, Nature Conservation and Nuclear Safety (BMU), was led by Prof. Dr. Inka Kaufmann Alves from Mainz University of Applied Sciences, and by Prof. Dr. Clemens Thielen at the HSWT. In addition to the two universities, igr GmbH and the municipality of Enkenbach-Alsenborn were involved in the project. It was also supported by the Nordpfälzer Land association of municipalities, the Mittlere Bergstraße municipal economy in Hesse, the municipality of Elxleben in Thuringia and the Ministry for Climate Protection, Environment, Energy and Mobility Rhineland-Palatinate.

Requests can be addressed to the team at info-akut (at) hs-mainz.de

News
Forum
Anniversary edition of the magazine of Mainz University of Applied Sciences is published
News
AllRad launches pilot program
Bike lane maintenance improvements undergo testing
News
DIGITAL URBAN HISTORY LAB opens
Digital research lab dedicated to historical urban development shows the medieval cities of Mainz, Worms and Speyer
News
Flood prevention in communities
Joint project led by Mainz University of Applied Sciences develops advisory tool
In order to analyse the use and to improve our websites, we would like to use cookies. If you agree, please click “Accept”. If you would like to select individually which cookies we can use, to amend your settings or to receive more detailed information, go to "More information".
Demo-Page