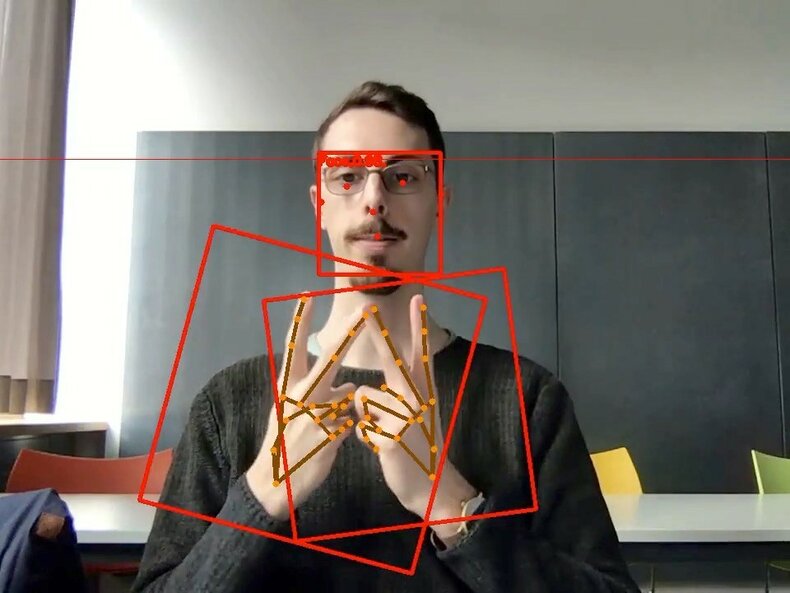 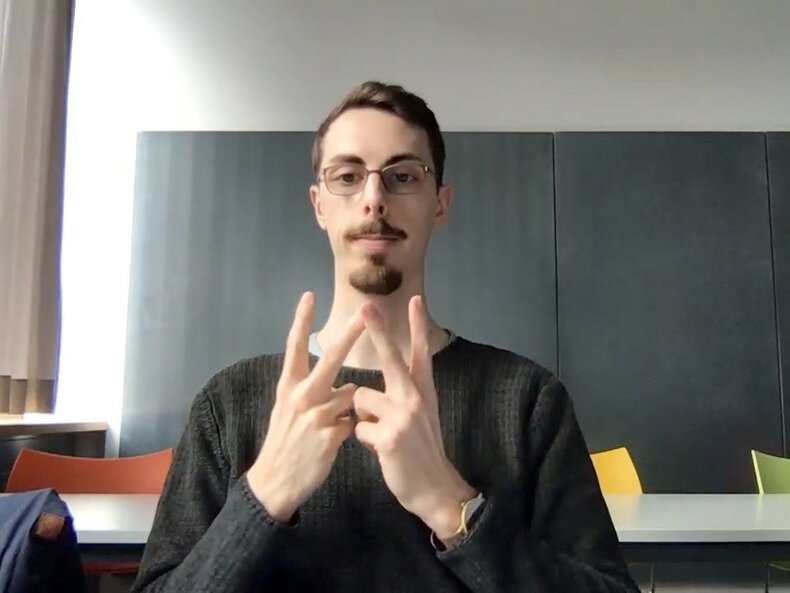 University Council of Mainz University of Applied Sciences Award given

Michael Darmstadt and Marius Martin, graduates of the dual degree program in Information Systems, have been awarded the Prize of the University Council of the Mainz University of Applied Sciences for their outstanding academic achievements. Michael Darmstadt and Marius Martin received the award, which is endowed with €2,000, for their bachelor's thesis Anwendung neuronaler Netze zur Echtzeiterkennung von Gebärden der deutschen Gebärdensprache (Application of neural networks for real-time recognition of German sign language signs). The thesis, supervised by Prof. Dr. Anett Mehler-Bicher, was awarded the best possible grade of 1.0.

Focus on suitability for everyday use

AI-based real-time translation systems now exist for numerous languages. Sign language translation, on the other hand, is still in its early stages. For the approximately 140,000 people who rely on sign language interpreters in Germany, computer-assisted translation can significantly ease the communicative barrier between them and hearing people. Due to the general complexity of sign languages, machine interpretation is challenging and different approaches need to be tested first. It should be noted that there is not only one sign language, but sign languages differ like spoken languages. For example, there is a specific German sign language.

The goal of the bachelor's thesis by Michael Darmstadt and Marius Martin is the analysis of the question of whether and how well neural networks are suitable for the real-time recognition of signs. This is to be evaluated by means of a prototype yet to be implemented. The work can be classified in the research field of computational linguistics, i.e. the machine processing of natural languages, since it deals in particular with the aspect of sign language, which represents a natural language. The focus is on the recognition of individual signs and must be distinguished from the translation into a spoken language.

Machine learning methods based on neural networks are used in most research approaches that address the recognition and translation of signs with the help of computers. In these, the software does not have to be explicitly programmed; instead the computer learns from examples. Since a human cannot describe the signs that precisely and program a computer to recognize them, a self-learning machine based on neural networks is the logical approach. The thesis also puts a special emphasis on the suitability of a potential system for everyday use.

To determine the extent to which a neural network is suitable for recognizing individual signs, a software prototype was created using the multimedia machine learning framework MediaPipe. For the prototype, eight different variants of neural networks were trained on over 3,000 sample videos for 30 different signs. The best models were implemented in the prototype and experiments were conducted regarding sign recognition. The best model achieved a recognition rate of 96.7% for the known signs in a controlled environment.

"The thesis is directed at highly contemporary research and implementation approaches and is outstanding," said Prof. Dr. Anett Mehler-Bicher. "With 30 signs, however, it is still a very limited vocabulary. In addition, the prototype is only capable of recognizing individual signs. Contextual sentences cannot be recognized at the moment. Nevertheless, the results of this thesis can serve as a basis for further research. For the approximately 140,000 people who depend on sign language interpreters in Germany, a computer-assisted translation could significantly ease the communicative barrier between them and hearing people. This bachelor's thesis by Michael Darmstadt and Marius Martin is an important first step in this direction and consequently of great interest to society."

The award was endowed by the University Council in 2009. Prof. Dr. Susanne Weissman, President of Mainz University of Applied Sciences, emphasized at the award ceremony, "This award is a special distinction for students and graduates, with which our university honors outstanding academic achievements. With this year's award, we are pleased to recognize a thesis that has great potential to be pursued as a possible research project."

To watch a video demonstration of the results of the thesis, visit

Other theses nominated for the 2021 University Council Award:

Sophia Lassimo: Limits to Growth: A Systematic Investigation of the Constraints at Frankfurt Airport

Ina-Maria Bernsdorf: "Moment" - Lässt sich mit einer architektonischen Form in Gestalt eines Raums eine Legende erzählen, die erst in 200 Jahren ihre ganze Kraft entwickelt? (Can an architectural form in the shape of a room be used to tell a legend that will only develop its full potential in 200 years?)

News
Guest lecturer from Epoka University, Albania
Guest lecturer at School of Business
News
Forum
Anniversary edition of the magazine of Mainz University of Applied Sciences is published
News
AllRad launches pilot program
Bike lane maintenance improvements undergo testing
News
DIGITAL URBAN HISTORY LAB opens
Digital research lab dedicated to historical urban development shows the medieval cities of Mainz, Worms and Speyer
In order to analyse the use and to improve our websites, we would like to use cookies. If you agree, please click “Accept”. If you would like to select individually which cookies we can use, to amend your settings or to receive more detailed information, go to "More information".