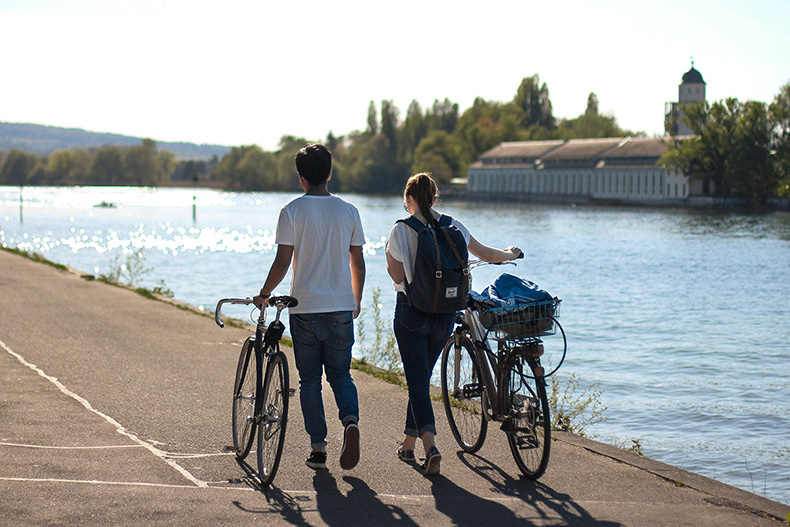 Survey launched to increase bicycle use

Research project in cooperation with the cities of Mainz, Munich, and Münster

Increasing the attractiveness of bicycling by improving the operational maintenance of bicycle path networks is the focus of the research project AllRad of Mainz University of Applied Sciences. The research sites are Mainz, Münster, and Munich.

Pollution, vegetation and bad weather, along with structural deficiencies and dangerous areas in the network of bike paths, are the main reasons why people leave their bikes at home more often – at least that is the hypothesis of Mainz University of Applied Sciences. “The safety and usability of bicycle paths are influenced by regular operational maintenance, especially cleaning, vegetation maintenance and winter services. The aim of the project is to increase everyday bicycle use through improved bicycle path maintenance,” says Project Head Prof. Dr.-Ing. Rainer Hess, who holds the Professorship of Road and Traffic Engineering in the Department of Civil Engineering at Mainz University of Applied Sciences.

After developing measures to improve bicycle path maintenance and then testing them as part of the AllRad project, an impact analysis is now underway with an after-action survey. The two-week survey for bicyclists, starting immediately, will assess the public’s subjective perception of bicycle path maintenance and changes since the first survey in winter 2020. To draw firm conclusions about possible improvements, the impact of the measures applied will also be analyzed.

With Mainz, Münster, and Munich, the AllRad project examines three cities that differ in terms of their topography, level of bicycle use, weather conditions, and bicycling infrastructure. By incorporating these local differences and seasonal fluctuations, the result is intended to be an action concept that can be applied throughout Germany. This will make it possible to improve the condition of bike paths and increase cycling in other cities in the future.

Communication as an important factor

Along with technical and organizational possibilities for improvement, the area of communication, as a key factor for the satisfaction of traffic participants, will be included in the project. The application and subsequent impact analysis of various communication measures in relation to bicycle path maintenance will subsequently help the communities to conduct targeted and effective public relations work in this area.

The AllRad project was one of twelve projects approved nationwide to receive funding from the National Cycling Plan. The project is expected to be completed in March 2023. The total volume of the project is 109,810 Euro, of which the Federal Ministry for Digital and Transport (DMDV) is funding 80 percent (87,848 Euro), with the remainder being borne by Mainz University of Applied Sciences from its own funds.