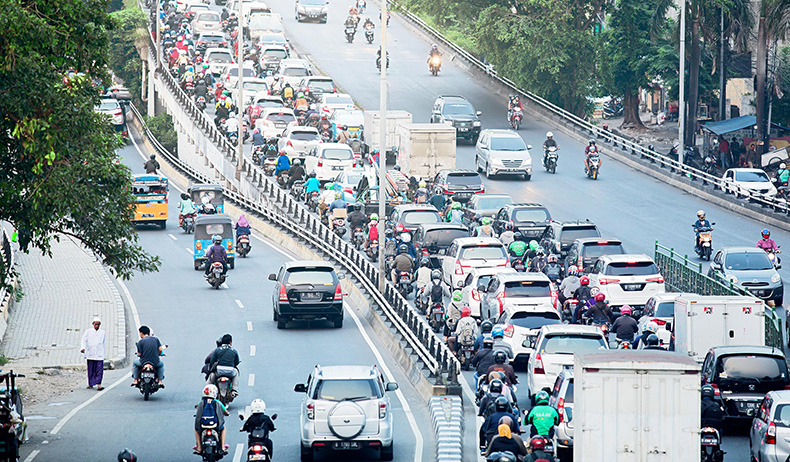 The title image shows a typical example of a flow constrained by capacity limits. Here, the congested road corresponds to an edge in the network of roads.

Isabel Münzenmaier, a student of the master’s degree program in Building and Property Management, received the €500 sponsorship award of the VDI Rheingau regional branch on 9/28/22 for her final thesis, Application of Flows to Networks in Civil Engineering.

Complex networks are represented by nodes and edges in graph theory. Graph theory has many useful applications in everyday life. Examples include finding the shortest path between two cities (route planner), determining an optimal circular route where all edges are traversed exactly once (optimal route for garbage collection), or determining perfect matches between people (dating service). Behind these applications are graph theory algorithms.

Isabel Münzenmaier’s thesis deals with another application, the ‘determination of the maximum flow’ on a multimodal transport network. As an example, the author investigates the transport of precast concrete elements from a manufacturer s (source) to a construction site t (target) on different transport routes with given maximum capacities and means of transport (truck, train, ship, or airplane). The goal of the paper is to calculate the maximum amount of goods that can be transported on the network while keeping costs at a minimum.

Although this result can also be obtained by simple trial and error in the present example, a solution for more complex networks with many nodes and edges (i.e., when applied to real-world problems) is only possible by successively applying the Ford-Fulkerson and Floyd-Warshall graph theory algorithms used by Ms. Münzenmaier.

The results of the thesis clearly show that the increased planning effort required by such a network analysis in civil engineering is rewarded with interesting insights in terms of more sustainable transport and more economical overall solutions. Mainz University of Applied Sciences congratulates Ms. Münzenmaier for her outstanding thesis, which was awarded the VDI Prize.